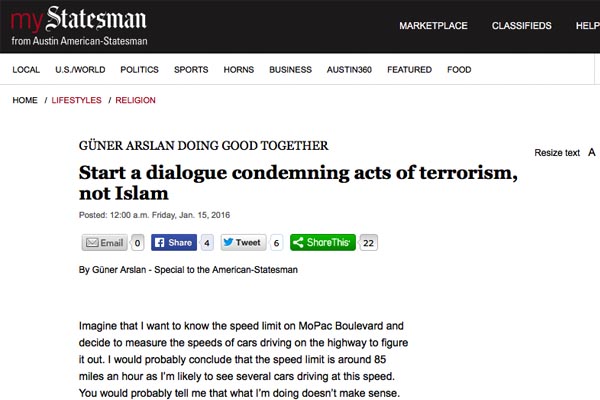 Start a dialogue condemning acts of terrorism, not Islam

Trying to deduce what Islam teaches by looking at some Muslims who end up on TV because they commit horrible crimes makes as much sense as trying to figure out the speed limit by looking at cars on MoPac. Instead, one should look at what Islam actually teaches and judge the actions of those on TV accordingly. Judging a group of people based on a few members, however, is human nature unless we recognize this fact and deliberately seek to avoid prejudices. One of the best ways to get around prejudices is to engage people from the group in question.

Dr. Güner Arslan is a founding member of the Dialogue Institute of the Southwest where he also acts as a speaker … read more

As a group of Turkish American Muslims we started the Dialogue Institute back in 2002 in Austin. It is now active in six states with 19 chapters. I like to define the mission of the Institute as finding excuses to bring people together. Since its inception the Institute has been reaching out to churches, synagogues and temples to establish dialogue between communities.

In the past couple years, however, I feel like our mission has become a constant denunciation of the heinous acts by groups such as ISIS. Although countless Muslims speak up against these crimes in many forms, I keep hearing the same question: “why are moderate Muslims not speaking up?” Unfortunately, speaking up against these acts is not as newsworthy as committing crimes against humanity. Only a small fraction of those who do actually make it to the public.

One prominent Muslim scholar who spoke up after recent attacks was Fethullah Gulen who published an article in the French daily “Le Monde.” I would encourage everyone to Google this article and read it in its entirety but I would like to quote the following two translated paragraphs:

“The recent tragedy in Paris is yet another reminder for both theologians and ordinary Muslims to strongly reject and condemn barbaric acts perpetrated in the name of our religion. However, at this juncture, rejection and condemnation are not enough; terrorist recruitment within Muslim communities must be fought and countered by an effective collaboration of state authorities, religious leaders and civil society actors. We must organize community-wide efforts to address all factors that aid terrorist recruitment.

Our responsibility as Muslim citizens is to be part of the solution despite our grievances. If we want to defend the life and civil liberties of Muslims around the world, and the peace and tranquility of every human regardless of their faith, we must act now to tackle the violent extremism problem in all its dimensions: political, economic, social and religious.

By setting virtuous examples through our lives, by discrediting and marginalizing the extremist interpretations of religious sources, by staying vigilant toward their impact on our youth, and by incorporating democratic values early in education, we can counter violence and terrorism as well as totalitarian ideologies that lead to them.”

The struggle is not between the West and the Muslim world but between human civilization and barbarity. In the Muslim world we need to support basic human rights, rule of law and education that teaches youth to voice dissent in democratic ways as communities who lack these are easier targets for recruitment by those groups. Here at home we need to reach out to our fellow citizens and make the point that anti-Muslim rhetoric is counterproductive and might provide propaganda material to those groups to attract more recruits.

We at the Dialogue Institute are committed to be part of the solution. I would like to extend an open invitation to all Austinites to get in touch with us to further the dialogue.