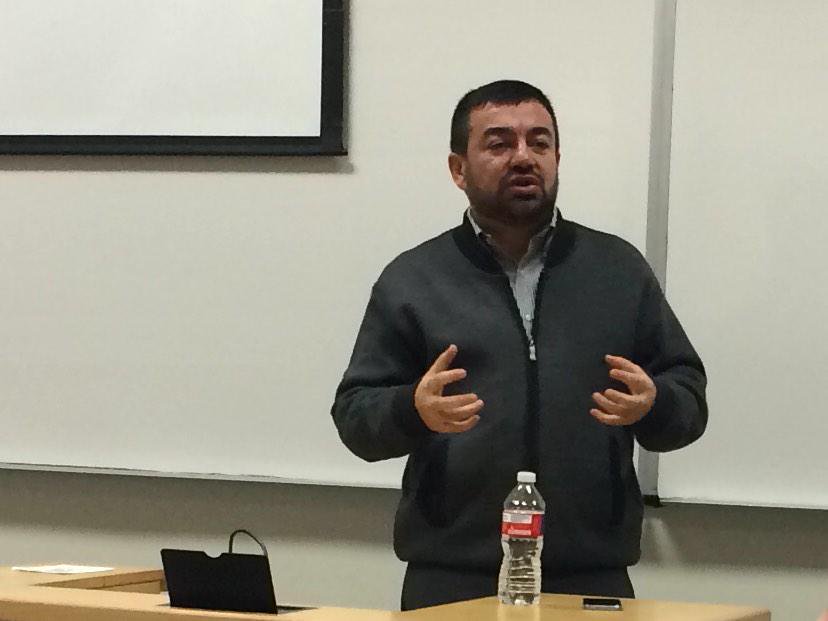 Dialogue Institute of the Southwest and the Center for Middle Eastern Studies at UTA sponsored  an Interfaith Academy event together on February 5th. Abdullah Antepli, the first Muslim chaplain to serve on a United States university campus, gave a speech on his life’s journey and tips about how to realize a life of public service after graduation.
After his presentation, Antepli had a discussion on the same topic with interested students and faculty members in another UT building. You can find  below detailed information on his journey towards being the first chaplain in a US university campus.
One of six children, Antepli was born March 6, 1973, to a privileged family in Maras, very near Antioch, the city in southeastern Turkey where the apostle Paul based his ministry.

The soft-spoken Antepli’s sense of humor surfaces with quicksilver speed, his tone shifting from gentle solemnity to bemused wordplay. He describes himself as an enthusiastic fan of Duke basketball and the only imam who “prays for the Devils”—a reference to the university’s Blue Devil mascot. By the time he entered high school, the conflict between him and his parents led them to issue an ultimatum: abandon Islam or move out of their home.

After earning his degree and completing imam training in 1996, Antepli wanted to continue working for social justice, a passion he had discovered during college. He spent the next eight years in Southeast Asia with faith-based NGOs building orphanages and helping to rescue children trapped in the sex trade. Those efforts were as gratifying as they were heartbreaking.
In what Antepli described as another divine intervention, the Burmese government closed access to NGOs for six months in 1999. The break provided him an opportunity to travel to the United States for graduate study at the University of Pittsburgh. Three days after his arrival, Antepli was asked to volunteer as a part-time Muslim chaplain there and at nearby Carnegie Mellon University.

“The only ‘chaplain’ I had ever heard of was Charlie Chaplin,” says Antepli with a wry smile. Soon he was convinced that chaplaincy was his life’s work. It was not just chaplaincy that appealed to him, but the secular and pluralistic nature of American society.

Antepli had been offered the position of Muslim chaplain at Princeton, but before accepting was urged by a friend to visit Duke, which was also interested in hiring a full-time chaplain. Once here, he was attracted to the wider role Duke offered him.